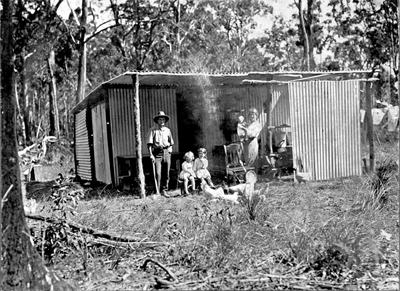 The Beerburrum Soldier Settlement was an Australian Commonwealth Government funded, Queensland State Government administered effort to provide land to repatriated servicemen who had served in the Australian and Imperial armed forces during World War One. The Settlement was established in 1916 and ran until terminated during the late 1920’s, though many settlers stayed on the land beyond that and some of their descendants are still living in the region.

The Settlement comprised over 56,000 acres of land centred on the North Coast Line railway station of Beerburrum. It ran from Elimbah in the south to near Landsborough in the north, and from the Pumicestone Passage in the east to the D’Aguilar Range in the west. The settlers were required to clear the virgin bush, establish their landholdings, build their own residence and cultivate a crop of pineapples to be harvested and sold to a State cannery for ultimate sale to consumers. Whilst ultimately a failure, the Settlement did turn the insignificant  railway siding into a town of nearly 1000 residents complete with schools, a hospital and even a racecourse. It necessitated the building of an even larger station; it had various stores, a butchery, a blacksmith, some churches and even a guest house. It was the largest post war Land Settlement scheme in the country and attracted such dignitaries as the Prince of Wales and General Birdwood (one time commander of the Australian army divisions during the war) to visit.

The settlers were mainly Australian ex-soldiers but many had served in the British and Indian armed forces as well as munitions workers, some civilians and even a war widow. Their numbers included various MC, DCM, DSO recipients and men from diverse backgrounds including writers, school teachers, farm hands, train drivers, sailors, office workers. All were lured to Beerburrum by the prospect of cheap land and the opportunity of a “fair go” at establishing themselves on the land after their selfless sacrifice made during the war. These settlers had served in all branches of the armed forces and in every significant engagement of the war from the New Guinea expedition of August 1914 to the battles of the 100 Days in the autumn of 1918. Their collective experiences were a microcosm of Australia’s entire war time involvement.

The Adopt-a-Digger Project (www.adoptadigger.org) is seeking to identify the 600+ individuals who settled around Beerburrum during this time, to document their experiences and to trace their descendants to the present day. We aim to create a permanent historical record of these settlers in time for the centenary of the establishment of the Settlement in 2016. As such we are seeking any records that people might have in the form of letters, narratives, photos, family oral tradition and other memorabilia relating to individuals known to have had a connection with the Settlement between  1916-1930.

If anybody has any such material, no matter how seemingly small or insignificant, we would welcome them contacting us. Additionally, we have a database of the names and service numbers of 600+ confirmed settlers with a known connection to the Beerburrum Soldiers Settlement, so if anybody is not sure if their person of interest has a connection or not do let us know and we can check our records.

In the build up to the 2016 Centenary we do hope to put on an exhibition relating to the Settlement and we are also available for talks to interested groups or associations locally.

Click on the link below to see our photo gallery of Beerburrum images.
http://www.adoptadigger.org/gallery/beerburrum-soldier-settlement