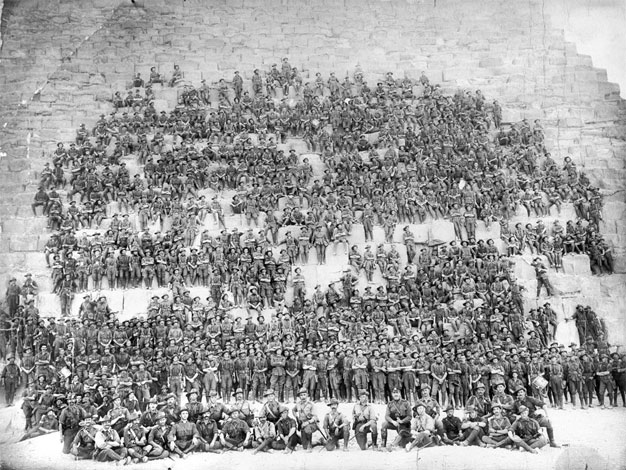 Officers, including Captain William Annear and men of the 11th Battalion, AIF photographed on 10 January 1915 at the Great Pyramid near Mena Camp shortly after their arrival in Egypt. [AWM A02875]

How many Australians fought in WW1 and how many died?
Statistics from Australian War Memorial website: http://www.awm.gov.au/encyclopedia/enlistment/ww1.asp

416,809 Australians enlisted for service in the First World War, representing 38.7% of the total male population aged between 18 to 44.

At the end of the war:

At almost 65%, the Australian casualty rate (proportionate to total embarkations) was the highest of the war.

How many Sunshine Coast diggers fought in WW1?
As at December 2012, ADOPT A DIGGER has recorded 2,192 men and women (including ten staff nurses) who enlisted for service in the First World War. This includes the soldier settlers who took up land at Beerburrum Soldier Settlement from 1916. More soldier settlers will be added as they are identified and this section will be updated.

As more research is completed and results come in, we will update these figures and break down the statistics even more, eg by town.

Staff nurses from the Sunshine Coast: