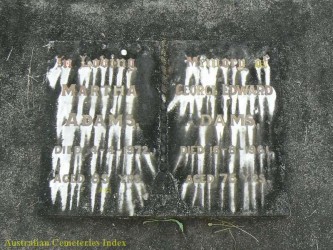 George was a blacksmith and coach builder by trade and was employed by Cobb & Co. for some time. He married in Brisbane in 1909 to Martha Snook from Nambour. In 1912 they commenced business in Eumundi. He was one of five Eumundi men who enlisted in the 5th Light Horse Regiment. He was a Maroochy Shire Councillor for nine years and retired from business in 1960.
They had a son George and a daughter Alice.

George Adams was a blacksmith, wheelwright and coachbuilder living in Eumundi. His nickname ‘Spokey’ might have had something to do with the occupation of making spokes for carriage wheels. He was employed for a time by Cobb & Co., Charleville prior to 1913and his attestation papers said he had 3½ years apprenticeship as a blacksmith in England. George later purchased the Eumundi blacksmithing business in Cook Street owned by the late Thomas Tucker.
In 1909 George Adams married Martha Snook, daughter of Sunshine Coast pioneers, John Snook and Betsey Perren and they had two children.(John Snook was killed as a young man in a logging accident and Betsey married Robert Roberts, who raised John’s children as his own.) George enlisted in the 1stAIFin 1917 despite having two young children, George (6) and Alice (2). He sold the blacksmithing business to a former employee, Tom Robinson.
As for most young country men, joining the army was a new experience. They were loaded on the ship “HMAT A55 Kyarra” with their horses and gear to travel overseas to Suez during the First World War. George’s unit travelled on to Moascar and then to Palestine. Adams was described on his papers as having brown eyes, and dark hair with a dark complexion. He stood at 5feet 8inches tall and entered the army as a shoeing smith, a much needed profession in the Light Horse Regiment.
On his return to Australia and subsequent discharge from the army, George Adams returned to his home in Eumundi. There was much to do following the privations of war, even for a country that hadn’t been invaded. He once again purchased his former business, then owned by Jack Locke, and expanded it to take in the motor trade. He later worked as a Land & Commission Agent (Auctioneer), ran a general hardware store aided by his wife Martha, and became a councillor for the Maroochy Shire, serving in that capacity for nine years. George was a very determined man when it came to working for improvements to the Eumundi District.
With the versatility of men in that era, Adams was agent for the “famous” Defender Refrigerator and sold every description of trucks, tractors and farm machinery. George Adams took an interest in all sporting activities in the district and was the Secretary of the Eumundi Race Club operating there in the early 1920s. The former race course became a part of Mr. A.R. Robertson’s property in Sale Street.
George was one of five Eumundi residents who were members of the 5th Light Horse Regiment during the First World War. His passing reduced the ranks to two –Mr. W. Buck and Mr. I.W. Adams (George’s brother.)Tom Burrell and Mr. J.M. Lyons predeceased him.
George’s widow, Martha Adams died in 1972 and is buried in Eumundi Cemetery beside George.
Sources: National Archives of Australia; Nambour Chronicle 14 November 1913, 7 January & 28 January 1955; 1 September 1961 p.10.; 4 April 1972; 4 May 1972 p.72; 22 August 1972;Eumundi Families –“A Centenary Celebration” by Hessie Lindsell; With kind permission from Adopt-a-Digger.