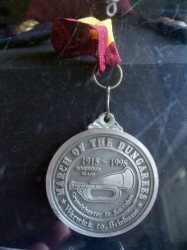 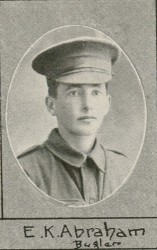 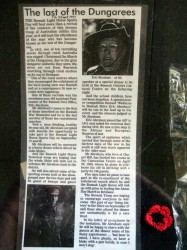 During World War One there were a number of recruiting marches. The first was in New South Wales from Gilgandra to Sydney stopping at intermediate towns to swell the numbers of recruits. To give a semblance of uniformity the marchers were issued with dungarees (work uniforms) by the army. The next march was organised in Queensland. It started in Warwick and ended in Brisbane. It became known as "The March of the Dungarees" so named after the army work uniforms.

Eric Kingsley Abraham, at the time a postal assistant in Boonah, joined this march. He was 17 years and 7 months old at the time, but added a full year to his age. So his army records always overstated his age by that year. Two of his brothers and two of his step-brothers had already enlisted. One of the step-brothers, 21 year old Herbert William Cooke, had been killed in action at Gallipoli the previous April. However that did not deter Eric's mother, Mrs Elizabeth Cooke of Eumundi, from giving her written consent to his enlistment. Parental consent was necessary for applicants under 21.

Eric enlisted on 26 November 1915 at Ipswich. His regimental number was 4355. He stated he was born at Hemnant and gave his mother as next-of-kin. He claimed 18 months prior service in Senior Cadets but did not state where this was. (Some records of his life state that he was educated at Ipswich Boys School until the age of 14. However the rolls of Eumundi State School show he was enrolled as a pupil there in January 1911 when he was 12 years and 8 months old. Where and when the service in the Cadets took place remains a mystery.)

The Chronicle of 11 February 1916, p7, reported that Bugler E Abraham was farewelled, with four other Eumundi recruits, at a send-off and presented with a pocket watch.

On enlistment Eric was 5 feet 71/2 inches; 132 lbs; chest 35 inches; complexion medium; eyes brown; hair black. His first training was at Enoggera army camp. He commenced his army career as a private in the 25th Battalion, 11th Reinforcement. He embarked on the Star of Victoria at Freemantle on 31 March 1916. He disembarked at Suez on 3 May 1916. From there he went on to England.

On 17 August 1916 he was transferred to Engineering Training Depot at Parkhouse. While there he probably learned that his twenty three year old brother Jabez had died of wounds on 21 August 1916.

Late October saw Eric headed for France. He arrived at Abbeville on 30 October 1916. He was taken on strength (as a sapper) of 5th Division Signals Company in the field on 22 November 1916. In January 1917 Eric was ill with bronchitis and pleurisy. On 24 January 1917 he embarked at Rouen on the Aberdonian for England. Two days later he was admitted to the Bethnal Green Military Hospital.

On 5 February 1917 Eric was transferred to the 3rd Australian Military Hospital at Dartford. This hospital was for the treatment of war-related nerves and neuroses. However Eric seems to have spent only 11 days there.

On 12 June 1917 a new Overseas Training Brigade was formed at Perham Downs, England. Eric was sent there on day one. On 4 September 1917 Eric left Folkestone for France. A cryptic note on 9 September 1917 states "sapper rejoined unit from sick in England." How much of his more than 7 months in England related to his illnesses or to his training isn't clear. For the next twelve months Eric's army dossier is curiously lacking in detail. All we can go on are the Fifth Divisions involvement in many of the great battles of late 1917 and of 1918, and some of Eric's published recollections. These battles included the Somme, Passchendaele, Polygon Wood, Amiens, Villers-Bretonneux, Morlancourt, Peronne and the Hindenberg Line.

On 24 September 1918 Eric commenced three weeks leave in England, before rejoining his unit in France for the last month of the war. He stayed in France for the next few months. During this time he was detached from his unit for a six week period to attend the Australian Corps Central School. He arrived back in Southampton on 16 March 1919.

He arrived there to engage for two months in what was described as non-military employment. He attended an advanced telegraphy course, still being paid at full military rates. He rejoined the 5th Division Signal Company on 20 May 1919. He embarked for Australia on 23 June 1919 aboard the Orita He disembarked in Sydney on 9 August 1919. He was discharged from the A.I.F. in Brisbane on 2 October 1919.

It might seem that Eric's war was over on his discharge in October 1919. Many years later his longevity, supplemented by his optimistic approach to life, his ability as a raconteur and his great sense of humour brought him much public acclaim. This is touched on in the personal history which follows.

Eric was born at Hemnant, Brisbane on 20 April 1898. His parents were Jabez and Elizabeth Abraham who had married in England in 1882. They had one daughter born in England. In 1886 they emigrated to Queensland where they had another daughter and six sons. Eric was their second last child.

Father Jabez may have been in one of the armed services in England because his headstone in Balmoral cemetery describes him as Captain Jabez Abraham. In Queensland we learn from the electoral rolls of 1903 and 1905 that he was a schoolteacher in Hemnant. Jabez died in February 1908, two months before Eric's tenth birthday.
After Jabez's death the family moved for a time to a farm near Ipswich where Eric attended Ipswich Boys School for a time. Then in late 1910, Eric's mother Elizabeth married recently widowed George Henry Cooke, headmaster at Logan State School. In January 1911 George Cooke moved with his new wife and family to take up a position as headmaster at Eumundi State School. Eric was enrolled at the school with his younger brother. He probably finished his schooling when he turned fourteen.

After leaving school he became the first operator of the telephone exchange in the Eumundi Post Office about 1913/14. He could not have been very busy, because in 1913, apart from the public telephone there were only two private lines in the town.

He was involved in other Eumundi activities. The Oxley Library has a photograph of the Eumundi Rugby League team circa 1914. Six of the smaller members are seated in the front. They include Eric, along with Jimmy Rubenach and Ted Gridley, who like him went to war, and unlike him, did not return.

He married Enid Ruth Hunter in 1923. The couple were to have two daughters. Ruth and family accompanied Eric in his various appointments in Queensland, New Guinea, New South Wales and Canberra. He added to his talents by qualifying as an accountant in 1929. The web site www.anzacday states he worked "for the Taxation Office, the Prices Commission, the National Insurance Commission, and retired as the Executive Officer of the Commonwealth Department of Health, Canberra."

After Eric's retirement the couple lived at Buderim Queensland for fifteen or more years. After Ruth's death about 1980, Eric returned to Brisbane, where he lived in comfortable obscurity until the 1990s. Then interest in Anzac Day celebrations began to focus on the steadily reducing number of World War One diggers. Alphabetical lists of surviving diggers were prepared for each Anzac Day with the Abraham name at the head of the list.

Eric had the right temperament for public acclaim. He was very approachable, happy to reminisce and had a good repertoire of stories. He featured prominently in many Anzac Day Parades. In 1998 he was one of four diggers who visited Villers-Brettoneux in France for the 80th anniversary of the World War One armistice. On that occasion he was made a Chevalier of the Legion of Honour of France.

More awards were to come. In 1999 he received the 80th Anniversary Australian Remembrance Medal. Then in 2002 he received a medal relating to his longevity rather than his military service, This was the Centenary Medal, issued to those living Australians who had been born before Federation in 1901.

Eric was also feted as the last of the Dungaree diggers. In 1999, in collaboration with Glen Farne Sang, he wrote "A Dungaree Digger" subtitled "The War Memoirs of Eric Kingsley Abraham, the last original Dungaree". This was published by the Department of Veterans Affairs.

At age 104, Eric died on 20 March 2003 at the RSL nursing home at Pinjarra Hills. Two days later he was given the honour of a State Funeral at St. John's Cathedral, Brisbane. His final resting place was Balmoral Cemetery where his father had been buried ninety five years earlier.

Image: French Legion of Honour awarded by the French President Jacques Chirac on 4 July 1998 in France.http://www.awm.gov.au/exhibitions/1918/victory/postscript.asp