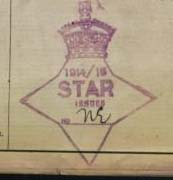 Be careful if you see this stamp for the 1914/15 Star on your digger’s National Archives Australia digital record. It does not mean your digger received this medal. The “NE” means “not entitled”. See the full information on WW1 medals below from the Department of Defence website.

The 1914 Star is a four pointed star of bright bronze, ensigned with a crown. The obverse has crossed gladius, overlaid with an oak wreath that is ensigned with the cypher of King George V. Interlaced in the crossed blades of the gladius is an ‘S' shaped scroll bearing the words ‘AUG', ‘1914', ‘NOV'.

The 1914 Star ribbon has the red white and blue colours of the Empire, in shaded and watered stripes.

A bronze clasp inscribed ‘5 th Aug – 22 nd Nov 1914'was issued to those ‘who actually served under the fire of the enemy in France and Belgium' between those dates.

When the ribbon is worn alone, recipients of the clasp to the medal wear a small silver rose on the ribbon.

The 1914-15 Star is a four pointed star of bright bronze, ensigned with a crown. The obverse has crossed gladius, overlaid with an oak wreath that is ensigned with the cypher of King George V. A scroll bearing the legend 1914-15 is centrally placed across the crossed blades.

Instituted by King George V in 1919 to mark the end of World War I and record the service given. The qualification period was later extended to cover post-war mine clearance and service in Russia during 1919 and 1920.

The British War Medal is cupro-nickel with the effigy of George V on the obverse. The reverse has an image of St George on horseback trampling underfoot the eagle shield of the Central Powers, and a skull and cross-bones, the emblems of death. Above this is the risen sun of victory. The years 1914 and 1918 are contained on the outside edge medal.

The British War Medal has a wide central watered stripe of orange, flanked by two narrow white stripes, which are in turn flanked by two black pin-stripes, further flanked by two outer stripes of purple. The colours have no particular significance.

The Mercantile Marine Medal is bronze with the effigy of George V on the obverse. The reverse shows a merchant ship moving through rough seas, with a sinking submarine and sailing vessel in the background. The base of the reverse has the words ‘FOR WAR SERVICE MERCANTILE MARINE 1914-1918', all surrounded by a laurel wreath.

The Mercantile Marine Medal ribbon has a narrow central stripe of white, flanked by green and red stripes. The design represents the starboard, steaming and port lights of a vessel.

The Mercantile Marine Medal was awarded to those who qualified for the British War Medal and could supply evidence of having served at sea on at least one voyage through a danger zone.

The Victory Medal was authorised in 1919 to commemorate the victory of the Allied Forces over the Central Powers. Each of the Allied nations issued a ‘Victory Medal' to their own nationals with all of these having the figure of Victory on the obverse as a common feature. Australians were awarded the medal issued by Great Britain.

A member mentioned in despatches (MID) for service during World War 1 wears a bronze oak leaf on the Victory Medal ribbon. Only one emblem is worn no matter how many times a member may have been ‘mentioned'. When a ribbon alone is worn a slightly smaller oak leaf is worn as a ribbon emblem.

The Victory Medal is bronze with a winged figure of Victory on the obverse. The reverse has the words ‘THE GREAT WAR FOR CIVILISATION', all surrounded by a laurel wreath.

The Victory Medal ribbon has a ‘two rainbow' design, with the violet from each rainbow on the outside edges moving through to a central red stripe where both rainbows meet.

The Victory Medal was awarded to prescribed classes of persons who entered a theatre of war on duty between 5 August 1914 and 11 November 1918.

The Anzac Commemorative Medallion was instituted 1967. It was awarded to surviving members of the Australian forces who served on the Gallipoli Peninsula, or in direct support of the operations from close off shore, at any time during the period from the first Anzac Day in April 1915 to the date of final evacuation in January 1916.

The medallion is cast in bronze and is approximately 7.5 cm high and 5 cm wide. The obverse of the medallion depicts Simpson and his donkey carrying a wounded soldier to safety. It is bordered on the lower half by a laurel wreath above the word ANZAC. The reverse shows a map in relief of Australia and New Zealand superimposed by the Southern Cross. The lower half is bordered by New Zealand fern leaves. The name and initials of the recipient is engraved on the reverse. The medallion is issued in a presentation box.

Surviving members were also issued with a lapel badge in the form of a small replica of the medallion to recognise their Gallipoli service. This badge is not issued to other applicants.