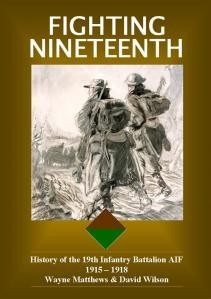 This much awaited history of the 19th Battalion, AIF traces its progress from Sydney in March 1915, to training in Egypt, and on to Gallipoli where it was responsible for the defence of Pope’s Hill. The story continues with its return to defend the Suez Canal, and move to the Western Front to participate in all the major campaigns involving Australians in France and Flanders. During the next two years, it experienced two cruel Northern European winters and suffered heavy casualties especially at the battles of Flers and Second Bullecourt. On 10 October 1918 the 19th Battalion was disbanded to reinforce other battalions in the 5th Brigade, 2nd Division.