At about 10.35am on 21 April, Baron von Richthofen, flying his red Fokker DR-1, engaged Sopwith Camels from 209 Squadron, RAF. He pursued a Camel piloted by a Canadian, Lieutenant Wilfrid May. In turn, the Baron was chased by another Canadian pilot, Captain Roy Brown. The three planes flew over Morlancourt Ridge, in the 4th Division’s sector, and Popkin – using a Vickers machine gun – and other Australian machine gunners and riflemen also fired at Richthofen. The Baron was hit by a 0.303 calibre bullet which passed diagonally from right to left through his chest. He then made a hasty but controlled landing, in a field on a hill near the Bray-Corbie road, just north of Vaux-sur-Somme. His Fokker was not damaged by the landing. One witness, Gunner George Ridgway, stated that when he and other Australian soldiers reached the plane, Richthofen was still alive but died moments later. Another eye witness, Sergeant Ted Smout, reported that Richthofen’s last word was “kaput” (“finished”) immediately before he died. Richthofen had allied plane kills to his credit and was only 25 when he died. Despite his enemy status, von Richthofen was so highly respected that the Allies buried him with full military honors alongside their own dead. 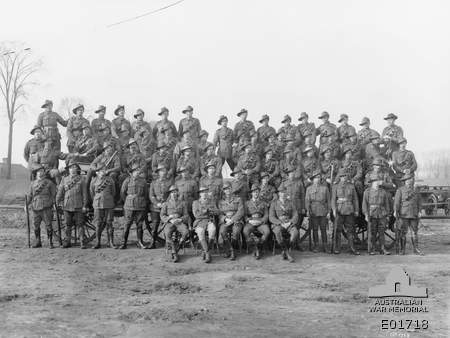 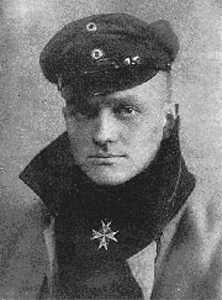 Von Richtofen's success as a flying ace earned him the nicknames der rote Kampfflieger (the Red Battle-Flyer) by the Germans, petit rouge (the little Red) or le Diable Rouge (the Red Devil) by the French, and the Red Knight or, most famously, the Red Baron, by the British.

Many experts believe that the shot came from Popkin. It is now considered all but certain by historians, doctors, and ballistics experts that von Richthofen was killed by an AA machine gunner firing from the ground, for a number of reasons. Autopsies revealed that the wound which killed the Baron was caused by a bullet moving in an upward motion. It was reported that a spent .303 bullet was found inside Richthofen’s clothing. These facts, and the angle at which the bullet passed through Richthofen’s body, suggest that he was killed by a long-distance, low velocity shot from a ground-based weapon. Popkin was an experienced AA gunner, the volume of fire from the Vickers was far greater (at least 450 rounds per minute) than the bolt-action Lee-Enfield rifles (up to 30 rounds per minute) used by the infantry, and Popkin was the only machine gunner known to have fired at Richthofen from the right, and from a long distance, immediately before he landed.

Private Alfred Fowler, with the 40th Australian Battalion, witnessed the Red Baron's death. He recalls delivering a message to a gunner at the 11th Battalion, who opened fire on Richthofen's plane and claims to have seen the bullets pierce the cockpit. Running to the wreckage, Fowler saw bullet wounds in Richthofen's chest, and was convinced he had been killed by the gunners. Despite this, the attending surgeons at Richthofen's autopsy were of the opinion that the angle and nature of the bullet wounds ruled out the possibility that he had been shot from the ground, and that the injuries were due to the efforts of a Canadian pilot Roy Brown. (ii)

As shown on PBS's NOVA (iii),  the medical reports showed von Richthofen was hit by an upward shot to the right side. But Brown would have been firing from behind and above left.

NOVA's program focuses on the two best-known claims attributing Richthofen's death to machine gun fire from the ground. These were made by two different Australian antiaircraft crews who were stationed on the Morlancourt Ridge. In 1956, Gunner R. Buie, a Lewis gunner of the 53rd Battery, wrote to Australian newspapers about how he and Gunner W. J. Evans had opened fire on a German plane chasing a British one toward their position. "I started firing at the body of the German pilot directly through my peep sight," Buie wrote. "Fragments flew from the plane and it lessened speed. It came down a few hundred yards away." Most researchers reconstruct Buie and Evans' firing position as facing the oncoming triplane, making it unlikely that either could have fired the side-on shot that killed the Baron.

"If the bullet had struck von Richthofen at close range, I would have expected a more explosive type wound," Peter Franks, a ballistics expert, told NOVA . "Now the evidence is that the wounds were actually probed by the medical staff after he had been shot down and they were actually able to follow the bullet path through the body."

When a human body is hit, there's an explosive effect called hydrostatic shock, which can be revealed by ballistics tests. The closer the bullet's range, the greater the wound damage. So a low damage, low velocity hit tends to indicate a long-range shot. "The fact that the bullet was found intact inside the clothing of Richthofen is another indicator that it was a long-range shot," Franks told NOVA, "and I would say that would be probably 600 yards plus."

In an email to ScienCentral, Franks went into more detail. "Because of the nature of the ammunition and how it performs within body tissue, we can determine in these circumstances at what approximate range the shot was fired. Because of the type of weapons that where involved, we can say that it was probably a Vickers MG that fired the shot. There was evidence of only one hit on the triplane, which would fit with the cone of fire from a Vickers at long range."

"So we asked our gun expert, what do we need to look at?" Norman Franks, an author and aviation historian, told NOVA. "He said, 'Have you got somebody who knows what they're doing, 600 yards away, and he's firing at von Richthofen's right side?' We said 'yes.' He said, 'There's your man'."

That man was Australian gunnery sergeant Cedric Popkin, who, according to NOVA, was firing a machine gun at the Baron's right side from the ground, about 600 yards away. "In our view and final analysis, the best candidate for bringing down von Richthofen was Cedric Popkin, Australian Sergeant machine gunner," Norman Franks told NOVA.

"Given the evidence and the claimants, we can say that it was a long-range shot, that is, over 600 yards," says Peter Franks. "The only claimant at that range is Popkin. We cannot, of course, discount a random shot from a long range, but it seems unlikely."

In his Official History, war historian Charles Bean suggests that it was probably Cedric Popkin who killed the Red Baron. The 24th Machine Gun Company War Diary for April 1918 includes a statement by Sgt Popkin:

"I was the Sergeant in charge of a Machine Gun detachment at J 19 d.

About 10.45am on the 21st April, 1918, one of our Aeroplanes was being engaged by a German Aeroplane and was being driven down. The Planes came from an Easterly direction and when within range of my gun, were flying very low, just above the tree tops. I immediately got my gun into action and waited for our own plane to pass me, as the planes were close together, and there was a risk of hitting both. As soon as this risk was over, I opened fire a second time and observed at once that my fire took effect. The machine swerved, attempted to bank and make for the ground and immediately crashed. The distance from the spot where the Plane crashed and my gun was about 600 yards. I handed my gun over to the No. 1 gunner and proceeded to where the Plane fell. The Pilot (whom I was subsequently told was Captain Baron Von Richthoven [sic], I saw had at least three machine gun bullets through his body, one in his ribs at the side, and a couple through his chest, and I consider he died as a result of these wounds from the time he was hit till he hit the ground, a matter of 2 or 3 seconds. He bled freely after he hit the ground from the wounds in his chest.

The British Plane which was being chased, did not fire at the German Plane when they were both low down and within range of any gun.
I am quite satisfied that the Plane was brought down as the result of the fire from my gun."
(Sgd.) C.B. Popkin, Sgt. (iv)

Nearly fifty years later, Popkin was less sure about events of 21st April and perhaps had forgotten his report to his unit commander. In 1964 he told the Brisbane “Courier Mail”, “I am fairly certain it was my fire which caused the Baron to crash, but it would be impossible to say definitely that I was responsible … As to pinpointing without doubt the man who fired the fatal shot, the controversy will never actually be resolved.”