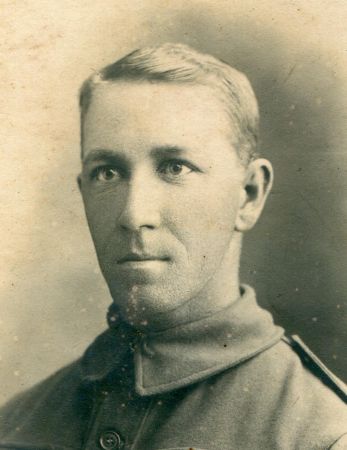 Robert Aird was born in Brisbane around 1884 and lived at Buderim Mountain when he enlisted on 24th August 1914 aged 30. His occupation was listed as a bridge carpenter. Robert was amongst the first to enlist and so He first served in Egypt before going to Gallipoli. Robert was 5' 8.5 INS tall, 150 lbs. He had blue eyes and light brown hair and a fair complexion. His father was Thomas MacCon Aird and his mother was Hannah Aird.

Robert was among the first to enlist and he left Brisbane on board the Transport A5 S.S. Omrah on 24th September 1914. The ship travelled to Albany W.A. and was part of the first convoy of troops to leave AUstralia on November 1 1914. On November 9 the convoy passed near the Cocos Islands where the SS Sydney had travelled ahead of them to disable the German warship the Emden which had to be beached to prevent it sinking. Two days later the soldiers saw the ship the Empress of Russia or CPR pass them on its way to pick up the crew of the Emden. This would have caused some excitement to those in the convoy

He went to Egypt and then embarked from Alexandria to join the Mediterranean Expeditionary Force ( Gallipoli Campaign) 2 March 1915.
He was Killed in Action on May 2 1915 at Gabe Tepe aged 31.

Robert’s father spent time writing to try and locate his son’s personal effects and eventually received a parcel containing - Disc, letters , a silver watch, pouch, purse and some coins and later a box containing cards and photos. In one letter it was stated that Robert had died at sea on board HMAS Gascon on May 2, 1915. Another report said he was killed in action at Gaba Tepe and buried by Cpl. S.G.Hunter . Medals 1914-18 Star British War medal, Victory Medal, Memorial Scroll and Memorial Plaque

Commemorative Ceremony Nu Lu Park Nambour – from Nambour Chronicle Friday October 5, 1923. A small gathering met at Nu Lu Park at the foot of Lamington Terrace to unveil name plates on the fence, and to plant trees to commemorate local boys who had gone to war and paid the supreme sacrifice. The eight boys remembered were C.Dall, S.E.Woolf, F.J.Jenkins, J.Kotkamaa, W. Gage, Robert Aird, T.N.Myers, and J.Vinnicombe. Many hours of voluntary labour over working bee weekends ensured the sites were properly prepared. Eight tree guards were erected and weeping figs which had been growing well in pots were thriving. Mr. A.P.Myers led the men in the planting of the trees in “their rightful place.” Everyone was relieved when the job was finished. It was hoped that the park would be a place of shade where people could come and remember the boys. Sadly the name plates have disappeared and few of the weeping figs have survived.

The Chronicle of 18 June 1915, p5 states the flags were flown at half-mast at Nambour when Robert was killed at Gallipolli.

Chronicle Friday June 25 1915 p.4 In further reference to the two additional names last week, Private R. Aird killed and G Abraham wounded we are now at liberty to give further particulars. Pte Robert Aird was the second son of Mr and Mrs Thos.Aird old residents of Nambour where the boy practically grown up. He was a popular footballer and took part in other sports as well. He had been employed in different capacities in and around Nambour but chiefly the connection with the butchering trade. He was one of the first to volunteer from this district.

Killed in action
Did not return
2 May 1915
Gallipoli, Turkey
31
No known grave