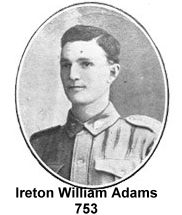 NAMBOUR 29th June 1937 – NAMBOUR CHRONICLE ( This article has information invaluable in reference to his early life)
The death of Matron Alice Ann Adams nee Knowles, of well known Nambour resident, on June 26th, at the age of 75 years removes another of the Maroochy Shire's earliest settlers. Deceased, who was a native of Lancashire, England, came to Queensland with her husband, Mr. William Adams (who survives at the great age of 85 years) in 1884. They stayed in Brisbane for some four years, and then came to the Maroochy River, where land was selected, and Mr. Adams carried on farming. After twelve years Mr. and Mrs. Adams, with their family, returned to England, where they remained for some eight or nine years. A short time after their return to the North Coast Mr. and Mrs. Adams moved to Nambour, where deceased established a private hospital and nursing home, the first in the township. Latterly Matron Adams, who was trained as a nurse in the Clapham Maternity Hospital, London, where her daughter, Matron L. E. Adams. of Nambour, also qualified for this profession, has lived in retirement. Besides her husband and the daughter referred to, deceased is survived by two more sons, Messrs. G. E. Adams, a well known Eumundi, businessman, and I. W. Adams, a Nambour farmer and president of the Nambour Fruitgrowers Co-operative Association. The funeral, which was well attended not only by Nambour, but by Eumundi residents, moved to the Nambour cemetery on June 27. Rev. W. R. Cowan. of the Presbyterian Church, officiating at the graveside.