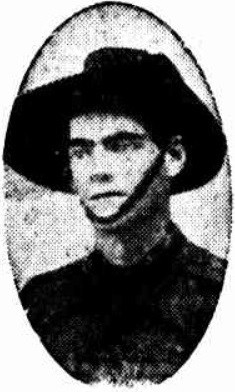 Cecil was born at Zillmere on 2 April 1897 to parents William and Ruth (nee Josey) He enlisted at Stanthorpe on 15 March 1915 and gave his occupation as labourer. He stood 5ft 9 inches tall and weighed 142 Lbs. Following time in 11th Depot battalion camp at Enoggera he sailed aboard Aeneas from Brisbane on 29 June 1915 and upon reaching Gallipoli he was taken ill with dysentry and evacuated to the hospital ship ' Nevasa'. He then spent time in hospitals on Mudros before being evacuated to No. 2 General Hospital at Cairo where he was diagnosed as suffering from Dysentry and Colitis. Once well enough he was moved to the Red Cross Convalescent Hospital at Alexandria and then onto the Convalescent Camp at Pt Said. the decision to send him home for a change was made and on 13 December 1915 he embarked aboard the hospital ship 'Wandilla" for the return to Australia. He disembarked at Melbourne on 14 January 1916 then travelled overland to Brisbane and admission Kangaroo Point Hospital for further treatment.

Although he made a second application to serve on 30 May 1916 this application went before the medical board and was declined owing to ongoing rheumatic symptoms following the enteric fever episode. His formal discharge was on 12 July 1916 at Brisbane. On 15 June 1918 he married Martha Absolon and was living in Ipswich when he died on 5 March 1976. Cecil was awarded the 1914-15 star.

Cecil, a clerk and wife Martha living in Caboolture 1919.