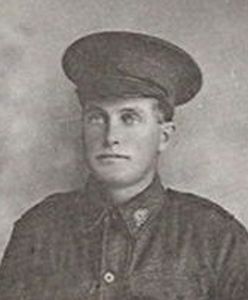 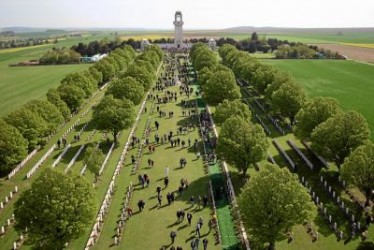 Father of the family, Jabez, may have been in one of the armed services in England because his headstone in Balmoral Cemetery describes him as Captain Jabez Abraham and in a photograph of him he is dressed in a military style. The family was living at Hemmant where Jabez was a school teacher. He died in February, 1908. After his death, Elizabeth moved her family to a farm near Ipswich.

On 22 October, 1910, Elizabeth married the recently widowed George Henry Cooke. George was Headmaster at Logan State School. Their marriage took place five weeks after his wife’s death in childbirth. George and Elizabeth moved the family to Eumundi, now numbering seventeen children, where he took up the post of Head Teacher at the local State School. This remarkable family made a huge contribution to the war effort with eight of their sons enlisting in the army, including Cyril. Three died and did not return to Australia:

At the time of his enlistment Cyril was living in Eumundi and stated that his occupation was that of a miner. He joined the 21st Reinforcements of the 26th Battalion in Brisbane on 19 October, 1917. He was 27 years of age with a fresh complexion, blue eyes, dark brown hair and stood at 165 cms and weighed 65 kgs. He would have spent his first four months in the army in training at the Enoggera Army Base, Brisbane. On 3 March he embarked in Sydney on board “Ormonde”, for Egypt, for further training. The trip took one month and he was sent to Camp Suez but on 15 April, 1918 he was evacuated and placed in a segregation camp in Suez as he had been in contact with other soldiers with measles. He remained there for a week in isolation. In 1918 there was no immunisation for measles and the only means to stop cross infection was segregation. Over 2000 soldiers died in 1918 from measles.

On 30 April, 1918, Cyril left Camp Suez and was transported to Port Tewfik (now Suez Port) where he embarked on the transport ship T15 for Southampton, England, and arrived there on 15 May, 1918. Reinforcements were only given basic training in Australia. Training was completed in training units in England. These were located in the Salisbury Plains area and Cyril was sent to the 12th Training Battalion at Codford. This training battalion had moved to Codford in 1916 and remained there until it moved finally to Hundcott in September, 1918. The war had a significant impact on the English landscape. Troops were garrisoned across the countryside and 15 different camps were created in and around the Wiltshire village of Codford and used as a base for both military training and convalescence. Earthworks associated with the Codford Camp Railway, as well as surviving buildings and wooden huts can still be seen today. ANZAC soldiers formed the main element among the troops at Codford but some British soldiers were also stationed there, on their way to the front.

In 1917, soldiers at Codford left an unusual memento that has become a lasting reminder of their presence there. Using the glass bases of beer bottles they sculpted a large (53 x 45 metres) Rising Sun badge on the side of a nearby hill. Polishing the glass, the story goes, became a punishment duty and the slope on which they worked, Lamb Down, became known as 'Misery Hill'. The badge was covered with turf during World War II but its outline has since been restored by scouring it into the chalk of the hillside. Though the military camps have long gone, the villagers of Codford maintain their Australasian connection by holding a memorial service on Anzac Day every year.

Whilst Cyril was training with the 12th Training Battalion he was transferred from the 26th Battalion to the 49th Battalion. After his training was completed he was transported via Folkenstone, England, to join his unit in Havre, France, and from there he moved into active service on 17 August, 1918.

The 49th Battalion was raised in Egypt on 27 February,1916, as part of the “doubling” of the AIF. Approximately half of its recruits were Gallipoli veterans from the 9th Battalion, and the other half, fresh reinforcements from Australia. Reflecting the composition of the 9th, the 49th was predominantly composed of men from Queensland. The battalion became part of the 13th Brigade of the 4th Australian Division.

A major German offensive on the Western Front was expected in early 1918. This occurred in France in late March and the 4th Division moved to defend positions around the Dernancourt on the River Ancre. The 49th Battalion assisted in the repulse of a large German attack on 5 April, launching a critical counter-attack late in the afternoon. The German threat remained until late April, and in the early hours of ANZAC Day 1918 the 49th participated in the now legendary attack to dislodge the enemy from Villers-Bretonneux. When the Allies launched their own offensive in early August, the 49th Battalion was among the units involved and played an active role until the middle of that month, when Cyril joined the battalion, before they moved to duties in the rear area.

The weather had turned cold and wet in October, 1918 when Cyril reported sick. He was initially admitted to No 13 Australian Field Ambulance and then transferred to the 41st Stationary Hospital in Pont Remy where he was diagnosed with bronchial pneumonia. Pont Remy was a village 11 kms south east of Abbeville on the northern bank of the Somme. Bronchial pneumonia is a lung infection caused by either a virus or bacteria. Cyril had fallen victim to the Spanish Flu. He died on 20 October, 1918 in the second wave of the influenza. The first wave in 1918 mainly affected the sick and the elderly but the virus had mutated and the second wave struck France in August probably starting around the Etaples area and it was triggering a cytokine storm that ravages the stronger immune system of young adults. The crowding of troops in trenches, camps, crowded transportation and field hospitals spread the deadly virus. The pandemic killed 50-100 million people worldwide.

Cyril was buried in the Dury Hospital Military Cemetery , Plot 2, Row A, Amiens France, however, this would not be his final resting place. His mother, Elizabeth, received two packages from London with his effects. One was a sealed envelope containing a letter from the Commonwealth Bank of Australia (London) dated 9 October, 1918 re remittance £8.10.0. The other was a parcel containing his identity disc, 3 pocket books, leather purse, fountain pen, 1 pipe and 2 coins. His mother was also the sole beneficiary of his will and his war medals. Elizabeth died in Queensland at the age of 62 in 1922.

In February, 1928, Gilbert Abraham, eldest brother of Cyril who now resided at Brooklands, via Kingaroy, Queensland, received a letter from Base Records advising him that Cyril’s body had been exhumed from the Dury Hospital Military Cemetery and reinterred in Plot 17, Row AA, Grave 5 of Villers Bretonneux Military Cemetery, France. A permanent headstone would be erected and engraved with his full regimental particulars and date of death, together with any verse or epitaph previously selected in the form of a personal inscription. The Imperial War Graves Commision had reported that visitors and pilgrims of the war graves were compelled to pass through the grounds of a French Lunatic Asylum where the inmates were at work. It was found impossible to provide other means of access and in the interests of relatives the Commission decided to remove the grave to the nearest British Cemetery as the only practicable way of overcoming the difficulty. 444 graves were moved from Dury Hospital Military Cemetery in the late 1920s.

The French Government also realised the unfortunate consequences that might arise through the presence of the asylum and had removed their soldiers’ graves from the vicinity. Under normal circumstances, the Dury Hospital Military Cemetery would not have been selected as a suitable site for burial, but owing to the exigencies of military operations and the 1918 pandemic no other choice presented itself. Further, in March, 1928, an identity disc was forwarded to Gilbert. This disc had been removed from Cyril’s body at reinterment and although somewhat impaired by exposure, was doubtless valued as an intimate association with his brother.