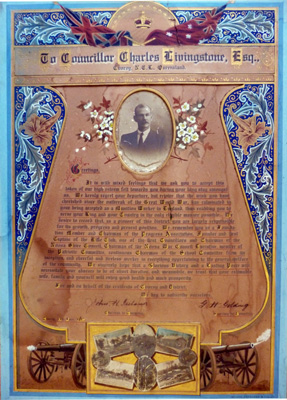 lluminated address presented to Councillor Charles Livingstone, Esq. by the residents of Cooroy, 13 June 1917 [picture] Summary: Presented on the occasion of Charles Livingstone's departure from Cooroy to serve as a Munitions Worker in England during World War I. A pioneer of Cooroy, Charles was acknowledge for being 'largely responsible for the localities growth and progress' as well as for his role as a Foundation member and Chairman of the Progress Association, Founder and first Captain of the Rifle club, one of the first Councillors and Chairman of the Noosa Shire Council, Chairman of the Noosa War Council, Executive member of the Patriotic Committee and Chairman of the School Committee since its inception.