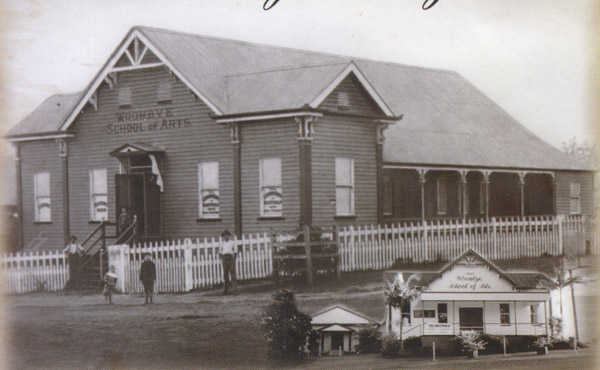 Like so many other Australian communities, both large and small, Woombye's community hall became the focal point for the district's patriotic activities during World War 1, where locals flocked to entertainments, bazaars and fetes organised by various groups (especially the local branch of the Red Cross). Here young and not-so-young district men were farewelled before they left for camp, and here also those fortunate enough to return were welcomed home.

Sunday school and state school children performed patriotic entertainments on the School of Arts stage; there were numerous concerts and balls, all in aid of war funds, with the stage usually draped in red, white and blue bunting. Here also recruitment officers did their utmost to encourage men to join the colours and returned soldiers talked of their experiences at the front, often illustrating their lectures with lantern slides. Recruiting visits could prove quite lucrative for the Committee; for example the Area Officer of the Fifth Battalion paid £3/18/- for the use of the hall in January 1915. The number of local and visiting lectures and entertainments meant that hall rentals also soared. A local Defence Force also drilled in the hall, paying £1/19/- each three months to the Committee.

The Red Cross was formed at a meeting held in the School of Arts held on 4 November 1914 and over the next four years members and their junior Girls' Guild met regularly to organise the dispatch of handicrafts, mostly knitted goods, to the troops. They also organised a series of Red Cross and Patriotic days during the course of the war, including such events as the 1915 Woombye Patriotic Day and the 1916 St Patrick's Day sports day held in the grounds of the School of Arts, culminating in a highly successful concert and ball.

When news reached Woombye on the evening of 11 November 1918, that an Armistice had been called in Europe, the town resounded to the whistle of Bartholomew's sawmill and the pealing of the church bell at St Margaret's Church of England. Blackall Street came alive as locals cheered, sang and danced into the small hours, happy to know that their boys would soon be coming home. 21 of the 66 district men who had volunteered for service had died serving King and Country, and lie forever in a French or Belgian field. On 30 November 1918 the hall resounded to the happy sounds of celebration as Woombye celebrated the coming of peace with processions, sports and dances. Returned soldiers, floats, school children from Woombye, Diddillibah, Mons and Keil's Mountain marched through the streets led by "The Pioneers of the District" in pride of place. A thanksgiving service was held in the grounds of Woombye State School, and in the evening the assembled throng moved to the showgrounds behind the School of Arts, where an effigy of the Kaiser - the cousin of their own King George V - was hung from a gallows and ceremoniously burned "amongst great hilarity".