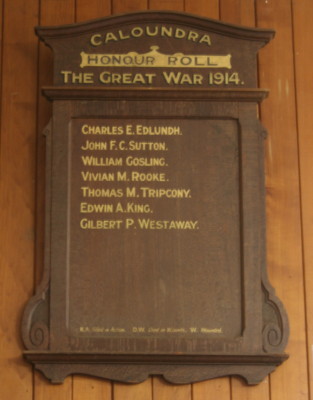 The Honour Board was commissioned by the School Committee in 1915. The board was unveiled in an impressive ceremony on Saturday night 11th Dec 1915 in the School Room (The Chronicle 17 Dec 1915). There were 5 names originally on the board - Charles Edlundh 1696, John FC Sutton 706, William Gosling 4728, Vivian M Rooke 4214 and Thomas M Tripcony 1986. Edwin A King 31026 and Gilbert P Westaway 33740 enlisted after the original five  and their names were added later. The Honour Board is made of polished silky oak, artistically carved, with figures and letters in gold, by John Hicks & Co. Brisbane. It measured 2 feet by 1 foot 6 inches. The board is now located in the Landsborough Museum.

After the war the committee commissioned and erected a memorial tablet in the school dedicated to the memory of Private William Gosling 4728 and Private Gerald Lewis 34. The tablet was a work of art. It was made of white marble, with the names of the soldiers, dates and suitable verses. It was then fastened on to a dark grey granite tablet which was screwed onto silky oak boards.