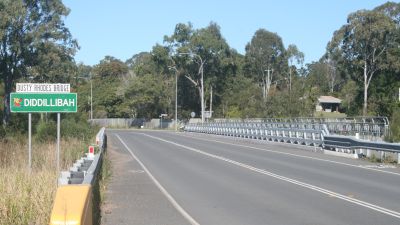 William Henry RHODES was born in Kilkivan and spent most of his youth as a stockman having selected properties at Nagoorin and Calliope. He enlisted in the 5th Light Horse Regiment as a private on the 22 March 1915 embarking for overseas service from Brisbane on the 27th August 1915 . He was posted as a driver with the 13th Field Artillery Brigade , however his service in France ended when he was wounded at Villers- Bretonneux in 1917 and was returned to Australia arriving on the 27 August 1917.

After being discharged from the army he returned to the Boyne Valley outside Gladstone in Queensland and in 1918 he married Miss Edith Vallis. He joined the Gladstone RSL and later was instrumental in forming the Ubobo RSL Sub Branch. Bill moved to Monto in 1928 to manage a garage and commission agency and was involved in the formation of the Monto RSL Sub Branch where he became the first Treasurer followed by election as President , a position he held for 9 years.

In 1936 he formed the Monto Troop 5th Light Horse Regiment and took a full troop into camp at Maryborough that same year. Promoted to Lieutenant and it was not long before there was a waiting list of volunteers sufficient to form three Troops. He received permission from his Senior Officers to enlist these men and they attended camp at Gympie being used to fill vacancies in Troops from other centres. Approximately 120 men enlisted in the 5th Light Horse from Monto and they became a familiar sight at shows and sporting events in the period 1936 to 1940. When the Regiment was unhorsed and formed into a Motor Regiment Captain Rhodes commanded Headquarters Squadron, and for period was Camp Commandant.He established a Brigade rest camp at Noosa, and in 1941 he took over the 3rd Mobile Recruiting Unit where he was officially accredited with enlisting 1500 men. He played an integral role in the organisation of troop trains transporting men from Brisbane to Townsville for a period of seven months . However his health began to fail as a result of his World War 1 injuries and he was discharged from the army medically unfit.

Returning to Monto he made himself a permanent hospital visiting committee looking after the needs of ex-servicemen in hospital despite his own failing health. After the war he played a prominent role in the RSL Club and construction of the Monto RSL Memorial Hall.
In 1945 he was nominated and accepted honorary life membership of the Monto Sub Branch RSL .In 1947 he left Monto to live in Nambour where he took up fruit farming. He became involved in Local Government and served as a Councillor on the Maroochy Shire Council from 1949 to 1952 and again from 1953 to 1958.
He was an active RSL member and worked towards construction of the Nambour Memorial Services Club which opened in 1954. He received life membership of the Nambour RSL in 1965. Bill Rhodes died in 1975 at the age of 84 after 57 years of service to ex servicemen and their families.
His contribution to the history of the Light Horse being the establishment of the Monto Troop 5th Light Horse Regiment, an achievement of which he was deservedly so very proud. (Source - www.lighthorse.org.au)