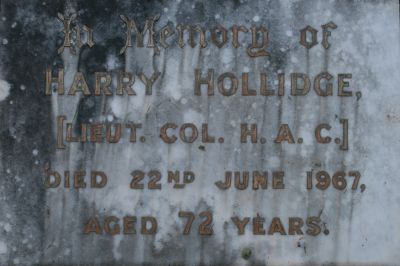 Harry William HOLLIDGE 3379 (UK) was born in 1895 and enlisted in England in the HAC (Honourable Artillery Company, Infantry, Essex Regiment). He departed London on 22 January 1948 bound for Sydney, Australia on board the "Strathaird". Harry had moved to the Sunshine Coast by 1958. He died in 1967 and is buried in the Woombye cemetery.

HOLLIDGE, Harry William
3379, Lieut. Col. Honourable Artillery Co., Infantry, Essex Regt.
b. 1895 Islington, Middlesex, England.
d. 22.06.1967 Sunshine Coast, Qld.
Next of Kin: Henry Leonard Hollidge and Mary Jane Gregory – Parents.
Following his service in the English army during World War 1, Harry Hollidge departed London on 22nd January 1948 bound for Sydney, Australia on board the "Strathaird". By 1958 he had moved to the Sunshine Coast.
The Honourable Artillery Company, known as H.A.C., is a company of soldiers incorporated by Royal Charter 25 th August 1537 by King Henry VIII. It is the oldest Military organisation in the world and is a branch of the British Army. Its role is Surveillance and Target Acquisition. Today, it is a registered charity whose purpose is to attend to the "better defence of the realm". This purpose is primarily achieved by the support of the H.A.C. Regiment and a detachment of Special Constabulary to the City of London Police.
The current Regiment, which forms part of the British Army Reserve (formerly the Territorial Army), is the second most senior in the Army Reserve.
They have many battle credits to their history including action at Thala in February 1943. They fought in the areas of Bucquoy, Arras and Ypres during World War One and moved on to the Italian front and in the Battle of Vittorio Veneto in October 1918.
In 1992, on Salisbury Plain, the H.A.C. was the last British Army unit to fire the twenty-five pounder in the field as the Gun Troop retrained on the 105mm light gun. The 25 pounder continued to be fired ceremonially until it was replaced by the light gun.
The current role of the HAC Regiment today is a unit of the Territorial Army based just north of the City of London, providing three squadrons of STA patrols. Comprising a team of six specialist soldiers, the role of STA Patrols is to conduct high risk static covert surveillance at long Range and in close proximity to the enemy.
Information from the HAC Website: http://www.hac.org.uk; National Archives of Australia
From the Genealogy Sunshine Coast publication
“AND THEIR NAMES SHALL LIVE FOREVER…”
REMEMBERING MILITARY PERSONNEL IN THE OLD MAROOCHY SHIRE CEMETERIES – BOOK 1, WOOMBYE
Harry is not included in the Adopt a Digger database as he falls outside our criteria of living in the district before 1925. He is included in this gallery as he has lived in the district later in his life and is buried in a Sunshine Coast cemetery. Importantly, as a WW1 digger he still deserves to be recognised and commemorated by our project.