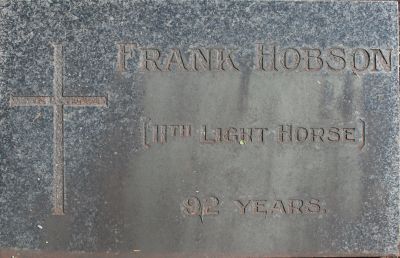 Frank Charles HOBSON 931 had moved to the Sunshine Coast by 1972. He died in 1975 and is buried in the Woombye Cemetery.

HOBSON, Frank Charles
931, Private, 3rd Reinforcements/11th Light Horse Regiment and 17th Camel Corps, AIF.
b. 1883 Caboolture, Qld.
Enlisted: 10.03.1915 Warwick, Qld.
d. 20.09.1975
Next of Kin: Mrs J. Hobson – Mother.
Frank Hobson was born in what can only be interpreted from the poor writing on his Army records as Caboolture, Qld. He was recorded as a labourer and was noted as being 5 feet 8¾ ins. tall and weighing 136 lbs, with a fresh complexion, blue eyes and brown hair. His religious denomination was Church of England.
Frank was not the accepted image of an ideal soldier. With his report liberally peppered with absences, illnesses, mild injuries and transfers between various Corps, he was despatched to the Light Horse Brigade at Cairo and Suez and later transferred to the Camel Corps. Somewhere between the litany of illnesses and misconduct he showed the strength of character, courage and defiance needed to be a leader – and was sent to Officers School on 13th July 1918. It was a tough war and needed tough men to last the distance.
Frank Hobson served his country well and received the 1914/15 Star, British War Medal and the Victory medal. He returned to Australia to live his life on the Sunshine Coast.
Source: National Archives of Australia
From the Genealogy Sunshine Coast publication
“AND THEIR NAMES SHALL LIVE FOREVER…”
REMEMBERING MILITARY PERSONNEL IN THE OLD MAROOCHY SHIRE CEMETERIES – BOOK 1, WOOMBYE

Frank is not included in the Adopt a Digger database as he falls outside our criteria of living in the district before 1925. He is included in this gallery as he has lived in the district later in his life and is buried in a Sunshine Coast cemetery. Importantly, as a WW1 digger he still deserves to be recognised and commemorated by our project.