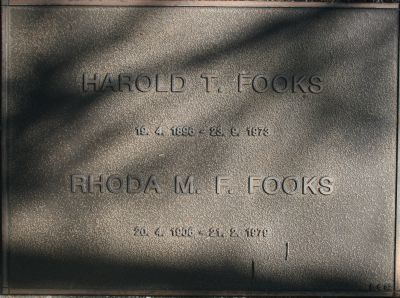 Description
FOOKS, Harold Thorp(e)
281, Private, 2nd Machine Gun Coy.
b. May 1894 Sydney, NSW.
Enlisted: 20.03.1916 Sydney, NSW.
d. 23.09.1973 Sunshine Coast, Qld.
Next Of Kin: William John Fooks and Mary Thorp - Parents.
Working as an orchardist in Sydney was not enough enticement to prevent Harold from enlisting with the AIF on 20th March 1916. At that time he was recorded by the military as being 5 feet 8 1/2 inches tall, with a sallow complexion, hazel eyes and brown hair. He had had previous experience with the Militia 19th Infantry.
Harold was assigned to the 3rd Reinforcements of the 5th Machine Gun Company. After a short period of training, he left Australia on 1st May 1916 bound for England and then joined the fighting in France.
In 1918 he was sent for more training with the Australian Corps Armament School.
He spent some time in hospital with influenza then was transferred to the 2nd Machine Gun Battalion.
Arriving back in Sydney on 4th July 1919, Harold was discharged from the AIF on 19th August 1919. He received the 1914/15 Star, the British War Medal and the Victory Medal.
It is not known exactly when he moved to the Sunshine Coast but it was between 1949 and 1954.
He married Rhoda Maggie Frances Moore who was born 20th April 1906 and died 21st February 1979. They have been buried together in Woombye Cemetery.
From the Genealogy Sunshine Coast publication
“AND THEIR NAMES SHALL LIVE FOREVER…”
REMEMBERING MILITARY PERSONNEL IN THE OLD MAROOCHY SHIRE CEMETERIES – BOOK 1, WOOMBYE

Harold is not included in the Adopt a Digger database as he falls outside our criteria of living in the district before 1925. He is included in this gallery as he has lived in the district later in his life and is buried in a Sunshine Coast cemetery. Importantly, as a WW1 digger he still deserves to be recognised and commemorated by our project.