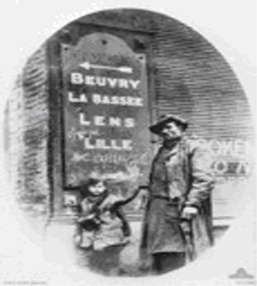 France. c. February 1919. 2198 Private (Pte) Timothy William Tovell, an air mechanic with No 4 Squadron, Australian Flying Corps, with the French orphan boy Henri Heremene who became the squadron mascot after he wandered into their Christmas dinner on 25 December 1918. No 4 Squadron was stationed at Bickendorf airfield Cologne, Germany, at the time. Henri was renamed Digger and he attached himself to Pte Tovell. It was established that from about the age of six he had been a mascot to several British units and had been wounded in the knee near Ypres. His father had been killed in action with the French Army and his mother was killed in a bombardment. The medical section calculated his age as eleven and 25 December 1918 was set as his birthday. A special uniform was made for him and he moved with the squadron in February 1919 to France and England. He was smuggled to England in a modified oat sack and a special tailored AIF uniform was made for him in London. The squadron embarked on the transport ship Kaiser-I-Hind for Australia on 6 May 1919 and Digger was smuggled on board in a sporting equipment hamper. The ship's Captain discovered he was on board but let him stay and with the aid of the Queensland Premier, who was on board the ship, special permission was granted for him to land in Sydney and move to Queensland. Pte Tovell and Digger arrived at the Tovill family home at Jandowae where Digger was accepted as a family member. The family later moved to Cooroy and later again to Brisbane. The French Consul agreed that Digger could be adopted by Tim Tovell but he could not be naturalised until he was 21. In 1926 at the age of 18 Digger left for Melbourne to work for the RAAF as a civilian member at Point Cook until he was naturalized at 21 and considered for entry into the service. On 24 May 1928 Digger died from injuries received when his motor cycle collided with a taxi the night before. Henri Heremene (Digger) Tovell was buried in Fawkner Cemetery where a special memorial stone was erected over his grave. His full story is told in the book Flying Matilda by N. Ellison. There is evidence of Henri signing his name as Honore, stating it is his real name. (Donor RSSILA Brisbane Sub-Branch). Photo and description AWM H13588.