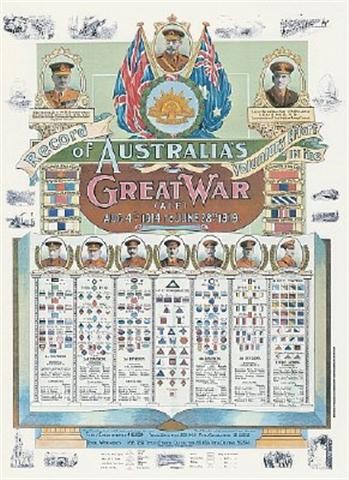 The Australian army's system of colour patches arose from the need to solve an immediate problem. When the first Australian Imperial Force (AIF) set off for the Middle East in 1914, the only badge it wore was on headgear and jacket collars: the Australian "Rising Sun" emblem, inscribed with the words "Australian Commonwealth Military Forces" (ACMF). Nothing distinguished one regiment from another. Divisional Order No. 81(A) Administration was issued at Mena, Egypt, on 8 March 1915 to overcome the problem:

In order the better to distinguish the several units of the Division, coloured patches of cloth 1 inches wide by 2 inches long will be worn on the sleeves one inch below the shoulder seam. Except in cases of Headquarters of Brigades and the Divisional Artillery, the Engineers and Army Medical Corps, badges will consist of two colours, the lower indicating the formation, the upper the unit etc. Light Horse [4th Light Horse] and Artillery badges will be divided diagonally, the others horizontally.

After the First World War the use of colour patches continued in the Citizens Military Forces (CMF), also known as militia. The CMF were reorganised into a divisional structure similar to that of the AIF. Units were generally renamed to provide a direct numerical association with AIF units raised from the same states and districts. Through their identification with AIF units came the authority for militia units to wear the colour patches of their associated AIF units; other colour patches were approved for units outside the AIF association.

With the outbreak of the Second World War, second AIF units were authorised to adopt the colour patches of their correspondingly-numbered first AIF forebears. In April or May 1940, an army instruction allocated grey backgrounds to second AIF colour patches. This instruction also reflected the reduction in the number of battalions in each brigade from four to three, reallocating colour patches to infantry battalions on the basis of the new divisional structure by shapes and colours which represented the new divisional, brigade and battalion seniority of their second AIF grouping. As a result, many battalions found themselves wearing patches unrelated in shape or colour to those of their first AIF forebears. Representations to Members of Parliament by first AIF unit associations and the (then) Returned Sailors' and Soldiers' Imperial League of Australia resulted in this anomaly being corrected around November 1940, by the issue of another instruction: second AIF battalions would wear the patches of their first AIF battalion forebears, superimposed on grey backgrounds and in the shape of the second AIF division to which they were allotted.

This colour-patch system remained in place until 1949, when the policy for post-war army dress adopted the British system of embroidered shoulder titles, formation signs and lanyards. From about 1960, the British system was abandoned, first by dropping formation signs, later by the partial replacement of shoulder titles with abbreviated metal corps and regimental titles worn on shoulder straps. In July 1987, following representations by a number of units, the Chief of the General Staff approved the wearing of colour patches on the right side of puggarees on hats in order to foster the Army's heritage. Units wishing to wear such a colour patch were required to research their lineage to prove their link with an original patch, preference being given to the older patches of the First World War.