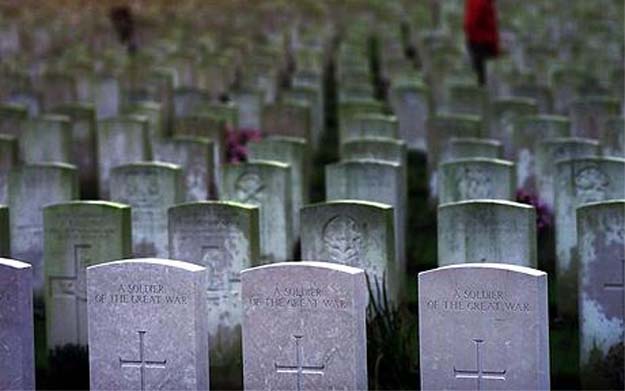 The families of millions of soldiers buried in unmarked graves in the First World War could be able to locate their relative's burial place after the British historian Peter Barton found a vast untapped archive in Geneva, Switzerland.

The information has the potential to show where many of the dead were laid to rest all along the Western Front and other battlefields of the Great War.

Mr Barton said it was the conflict's equivalent of the discovery of the tomb of the Egyptian boy-king Tutankhamen.

He unearthed the archive hidden deep under the Red Cross headquarters in Geneva, where shelf after shelf of boxed, typed records had lain untouched by researchers for decades.

The information has the potential to show where many of the dead were laid to rest all along the Western Front and other battlefields of the Great War and could mean that many of the headstones marked "Unknown Soldier" or "Known Only Unto God" might be changed.

It will also allow families to trace the history of grandparents and great-grandparents who perished in the bitter trench fighting.

Mr Barton, a First World War historian and author, found the archive after he was commissioned to find the identities of British and Australian soldiers found at Pheasant Wood, Fromelles, in France.

He went to the Red Cross Museum in Geneva where he discovered rows of boxes with card indexes of soldiers' details painstakingly entered by volunteers during the conflict where the organisation acted as a go-between for the protagonists.

Mr Barton found some records which referred to the identity of soldiers in mass graves giving directions for where they were dug. Some of the indexes include names and addresses with next of kin.

The copies have either been lost or destroyed in Britain but their existence in Geneva had hitherto been forgotten.

"To a military historian, this was like finding Tutankhamen's tomb and the terracotta warriors on the same day," Mr Barton said.

"I still can't understand why no-one has ever realised the significance of this archive - but the Red Cross tell me I'm the first researcher who has asked to see it."

The records show the death, burial and capture of up to two million servicemen from more than 30 nations who took part in the 1914-1918 war listing personal effects, addresses and grave sites.

Following the discovery the Red Cross will spend more than £2 million on the painstaking task of digitising the records in time for the centenary of the outbreak of war in 2014.

The final resting places of those listed as missing in action on memorial walls across France and Belgium could now be found.