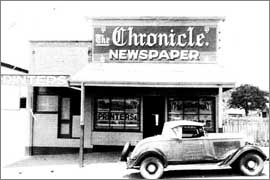 Eudlo - Our Volunteers
Mr Arthur Harris left last week to take his place with the boys in camp in Brisbane.
Latest report concerning Petty Officer Syd Mitchell is that he is progressing satisfactorily. The brave and popular lad was reported dangerously ill about 1 week ago.
Otto Neilsen is on his way to Egypt.

Cooroy - Killed on Gallipoli
News was received here that one of our townsmen at the front had "gone West". We refer to Bruce Robins, who was one of the first selectors of the Cooroy Estate and who, when war broke out, was one of the first to enlist. He took part in the Gallipoli fights, and has been over 12 months at the front. This is our first casualty and brings very close the horrors of the war. General sympathy is expressed for the bereaved relatives, the deceased having been very popular among the residents of the district.

More Volunteers
Several more of our young fellows have announced their intention of joining the colors, viz Mr Maguire, Bank of NSW, as soon as he can be relieved. Mr Edwards, who recently purchased a banana farm here, and Messrs W Leight and E.B. Collett having been accepted, and will go into camp in January. Several others will probably follow suit immediately the holidays are over, and if reports prove true we shall be losing a good few of our boys after the holidays, the majority seeming to realise the need of men.