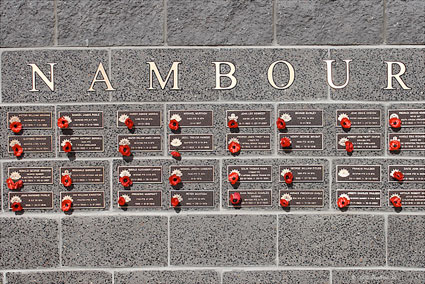 On this day in 1914 The Nambour “Chronicle” printed this article about the departure of six of our boys to serve overseas. It well denotes the mood of the district at the time and the pride it felt in the men who enlisted.
“Floreat Namboura”.

DEPARTURE OF THE 4TH CONTINGENT, by G.M.D.

“Greater love hath no man than this, that man lay down his life for his friends.” JOHN XV 13

The simple beauty of this lovely old text has not been dimmed by time. Rather have the ages added a more resplendent luster, until at the present time the man who offers to lay down his life for his friends is not only showing his love for them, but he is making a sacrifice, the benefits of which will be felt by his friends’ sons, and their sons, right down through the coming generations.

They were farewelled at the Royal George Hotel on Monday night last, where the big dining room was filled with men of all shades of opinion, anxious to express their appreciation of the six volunteers’ many good qualities. Whatever little faults the men have, they were forgotten in the knowledge that each and all of them possessed the greatest of all qualities, mentioned in the text above.

In spite of the intermittent flashes of wit and outbursts of joviality, the gathering was in deadly earnest, for Nambour has given the class of men that can ill be spared, and the seriousness of the work that lies ahead seems to be universally understood.

It would take columns to properly report the speeches, for every man in the room spoke in his turn. Many of them apologized for their inability to speak well when as a matter of fact their remarks contained more pure gold, in their sincere brevity, than the speech of many more oratorically inclined.

The chairman, Cr J.T. Lowe, was among the speakers [as] were Cr Gomersall (who threatens to go to the front himself), Messrs G.L. Bury, Wm Whalley, D Craig, A.S. Bates, A Bennett, J.J. Wilkinson, J.L. Johnson, J Ainsworth, and numerous others perhaps not so well off in worldly goods, but just as rich in sympathy with the objects of the meeting.

The toast of the volunteers was supported by everyone present. Some of the speakers hoped that it would be the volunteers’ good fortune to personally interview the Kaiser (it would be a stormy interview), others hoped the men would bring back a little Belgian widow each; another gentleman said he preferred to have the Kaiser’s widow, but one and all hoped that they would all come back safe and sound after their experiences.

The toast of the volunteers who had already left for the front was also honoured with enthusiasm, likewise the toast of the ladies (proposed by the chairman). The toast of the “Parents and Relatives of the volunteers,” again brought the meeting back to its bearings, and if ever a motion was genuinely supported in Nambour, it was this one. The response of Mr G.L. Bury was a particularly feeling one, as he briefly told of his sorrow at parting with his son but his pride at the boy showing that he possessed a “bit of the old stuff”. As a matter of fact, most of those present laid claim to a strong strain of the good old fighting blood.

It was nearly 11 pm when the meeting closed with the clasping of hands, and the singing of “Auld Lang Syne.”

At the railway station the next morning, the enthusiastic scenes of the night before were again repeated, and to the tune of ringing cheers and the explosions of detonators beneath the carriages, the 4th Nambour Contingent left “For the Front”.

It is worthy of mention that if all towns in the Commonwealth contributed men in the same proportion that Nambour has already done, the force that will shortly be leaving Australia would total nearly 100,000 men, instead of 20,000.