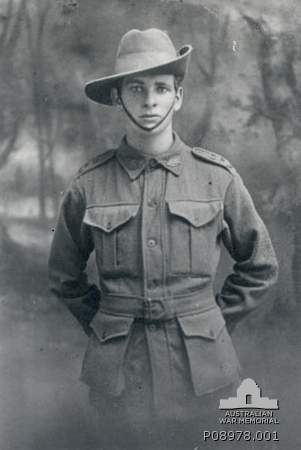 A great resource for finding photographs of people and places is through National Library of Australia's new website TROVE.

Whilst randomly searching www.trove.nla.gov.au, "Pictures & photos" I typed in 'Palmwoods'.

There were several photos of places but one came up of one of our diggers ERNEST ALBERT MILLAR, Service No 854. This then took me to the Australian War Memorial Photo Catalogue where the photo was displayed with the following information:

Studio portrait of 854 Private Ernest Albert Millar, D Company, 42nd Battalion, of Palmwoods, Qld. A teamster prior to enlistment, Pte Millar embarked from Sydney, NSW, on board HMAT Borda (A30) on 5 June 1916. He was promoted to Lance Corporal (L/Cpl) on 2 September 1917 and he was a Lewis gunner for his platoon. He was killed in action on 12 August 1918 during an attack at Proyart, France. L/Col Millar was 21 years of age and he is buried at Heath Cemetery, Harbonnieres, France.
AWM Ref. cas.awm.gov.au/item/P08978.001

So don't be timid about random searching. You never know what you may find. And now Ernest Millar has a photograph on his page!