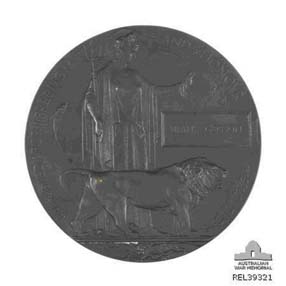 I saw my first "Dead Man's Penny" recently. A member of Caloundra Family History Research group brought one in to their ANZAC Day meeting. I was surprised it was the size of a saucer; I always imagined it the size of a large coin.

In 1922 a Memorial Scroll was presented to the next of kin of those soldiers, sailors or nurses who died while serving in the Australian Imperial Force (AIF) or Royal Australian Navy (RAN) during the First World War. Later they were presented with a Memorial Plaque.

Colloquially, the plaque became known as the "Dead's Man's Penny" - for obvious reasons.

The Memorial Scroll bears the Royal Coat of Arms and a message which includes a tribute to the soldiers who gave up their own lives that others might live in freedom. The large, round, bronze Memorial Plaque which was to accompany the Memorial Scroll shows Britannia and a lion on the front, surrounded by the inscription He died for freedom and honour. The full name of the dead soldier is engraved on the right hand side of the plaque. No rank, unit or decorations are shown, symbolising the equality of sacrifice of all casualties.