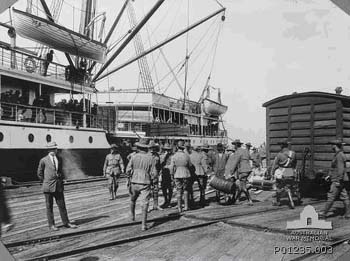 Formed in Queensland just two weeks after war was declared, the 9th Infantry Battalion of the first AIF was the first Queensland Battalion to embark for overseas. After a few weeks' training at Ennogera, the men embarked on HMS Omrah on 24 September 1914 from Pinkenbah Wharf in Brisbane. Six of "our boys" were in the 9th Battalion:

The 9th Battalion sailed to Egypt, arriving early December. As part of the 3rd Brigade, it was the covering force for the ANZAC landing on 25 April 1915 and so it was first ashore around 4.30am. The battalion was heavily involved in establishing and defending the front line of the ANZAC beachhead. It served at ANZAC until the evacuation in December 1915 when it returned to Egypt.