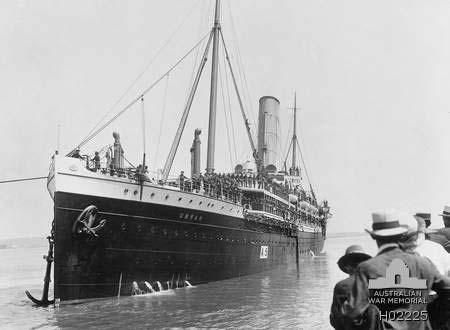 In central Caloundra, many of the streets are named after the Orient (later P&O) line ships, which were re-fitted as troop ships to transfer soldiers from Queensland to Egypt for training. In the early days of the war, these troops were then sent from Egypt to Gallipoli, and later to the Western Front in Europe.

The Omrah was the first troop ship to leave Brisbane, carrying members of the 9th Battalion, whose regimental motto is ‘First Ashore’, to honour the fact they were the first troops landed ashore at Gallipoli, to give covering fire for the rest of the troops coming after them.

Other such troop ships were: Ormuz, Orama, Osterley, Oronsay, Orsova, and the Canberra.

Presumably, when Caloundra streets were laid out in the early 1920s, all these troop ships were still in very recent and sorrowful memories of the surveyors and members of the shire council.

At Golden Beach there are streets named after WW1 generals, eg Monash, Haig, Birdwood, and other notables, eg Churchill.

On Caloundra headland (Wickham Point), there is a Memorial walk, which has plaque spaces for some 3,000 names of defence personnel of all wars, many of whom fought in the First World War.