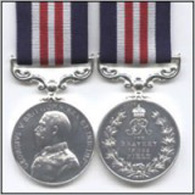 VICTORIA CROSS is the premier award for gallantry, available to all ranks, to cover all actions since the outbreak of the Crimean War, and later able to be awarded posthumously. VC holders, regardless of rank, are saluted by all ranks. Although this is not within military regulation, it is considered tradition and upheld today.

DISTINGUISHED SERVICE ORDER is awarded to officers below field rank in both services for distinguished service in a time of war, where the VC was not appropriate.

MILITARY CROSS is awarded for gallantry. Originally for captains, lieutenants and warrant officers of the army, it included AFC and extended during WW1 to include RAN.

Researching the Military Cross and other Imperial Gallantry Awards:

The London Gazette date is one of the entries on the War Memorial information page. The site at www.gazettes-online.co.uk/ is searched by name and date. This will reconfirm the award but does not shed any further light on the reason for the award.

Of course, the soldier’s National Archive service file will give excellent information.

As with other medals specific reference now to Bean’s Official History of Australia in the War and relevant unit histories will continue to provide information on the action and the man.  [Bean’s history is downloadable from the AWM website].

DISTINGUISHED FLYING CROSS is awarded to officers and warrant officers of RAF and RAAF for acts of valour while flying in active operations against the enemy.

AIR FORCE CROSS is awarded to officers and warrant officers of RAF/RAAF for gallantry on non-operational missions and meritorious service on flying duties.

DISTINGUISHED CONDUCT MEDAL as a gallantry medal for other ranks.

CONSPICUOUS GALLANTRY MEDAL is the naval counterpart to DCM, rewarding petty officers and seamen of the RAN.

DISTINGUISHED SERVICE MEDAL is awarded to petty officers and ratings of RAN for acts of bravery in the face of the enemy not sufficiently meritorious to make them eligibly for the CGM.

MILITARY MEDAL [image above] is awarded for NCOs and men of the army for individual or associated acts of bravery not sufficient to be awarded the DCM.

1914 STAR recognises service for British troops in and between 5 August and 22nd November 1914. For an Australian to receive 1914 Star, they had to be attached to a British unit.

1914-1915 STAR, identical except for changes of dates was issued to all who saw service in any theatre of war between 5 August 1914 and 31 December 1915 and who did not qualify for 1914 Star. Commonly known as Gallipoli Star, but only because Gallipoli was ’s major campaign of the time.

BRITISH WAR MEDAL 1914-1920 was awarded to all those who served in a regular or mobilized capacity for the war effort – whether they saw active service or not.

This is the only one of the three major medals for the Great War that could be issued on its own. In this case they are usually impressed to GSR (General Service Reinforcement) AIF and included Australian troops fresh from enlistment, on stand-to in England, and not yet attached to a unit on strength or to those units on home service, AN&MEF (Tropical Force) or training battalions. Its dates ‘1914-1918’ were concluded with Armistice, but the medal was issued to members of the navy in until 1920.

This unusual medal, issued by Board of Trade, was to be the first civil action war medal, and was awarded to the members of the Mercantile Marine who served one or more voyages through hostile waters.

The Victory Medal was never awarded alone and is a most prolifically awarded medal with in excess of six million being issued. These medals were issued to recipients or next-of-kin, mainly between 1921-1923.

MENTIONED IN DESPATCHES Emblem was introduced for WW1 in 1919 and backdated to 1914 as a form of recognition and reward for a notable action. It was often a sign of gallantry, not qualifying for a higher distinction medal. Unlike many other gallantry awards, the MID could be issued posthumously, so a Military Cross recommendation could actually be awarded as a MID if the soldier was killed.

Note: The unit on medals is always the first unit taken on strength and served with in a theatre of qualification.

WW1 PAIRS. Australians who entered a theatre of war after 31 December 1915 are recognized with a BWM/VM pair as full WW1 entitlement.

GALLIPOLI STAR approved by George V to be awarded to those Australians and New Zealanders who landed on the . Controversy arose after accouncement of the award, as the British who had served at Gallipoli were not eligible for the medal. Hence it was abandoned.

MEMORIAL PLAQUE often referred to as DEATH PLAQUE or DEAD MAN’S PENNY. This bronze plaque was sent to the next-of-kin to commemorate the loss of a loved on during the war or after the war as a result of war service.

MEMORIAL SCROLL, issued with the bronze Memorial Plaque, was a gift from the King and his people, as a memento of solace and bereavement for the next-of-kin of the deceased. The Scroll is of thick paper, approx 30cm x 19cm, with a standard inscription followed by the rank, full name, decorations if any, and unit of the deceased, hand calligraphed in red ink. Three variations exist for member of the different services and are differentiated only in the colour of the first letter H – being black for Air Force, blue for Army and red for Navy.

The SWB was worn on the lapel of civilian clothes to show that the recipient had served, and thus preventing harassment from members of society who may otherwise have deemed them cowards or unpatriotic. Discharged members had to produce their discharge paper to be issued the SWB and thuis was then stamped with the number of the badge. Wearers of this badge were required by law to carry and produce this stamped discharge certificate if challenged, and failure to do so resulted in a fine and investigation. The number on the reverse is simply a reference number and has no connection to the service number. All Australian issues have a large A prefix and were boxed with an award certificate.

This scroll issued with SWB with distinct designs for each of the services. The most common, Army version, is red and black and depicts an Australian and British soldier at arms in front of Britannia.

DISCHARGED RETURNED SOLDIER BADGE (AIF) issued in 1916, it encompassed both Army and AFC, while the Navy considered a separate entity and hence had its own series of badges. AIF badges which are numbered are able to be researched in some cases at National Archives of Australia site. Information can include rank, service number, full name, date of issue of badge and will also confirm the number of the badge.

DISCHARGED RETURNED SAILOR BADGE issued in 1916, was granted to members of the RAN who had been on active service afloat and had proceeded overseas.

OTHER BADGES referred to in book:

Johnson, Clive: “Australians Awarded: A Concise Guide to Military and Civilian Decorations, Medals and other Awards to Australians from 1815 to 2007 with their Valuations”. 1st Edition, Renniks, , 2008.