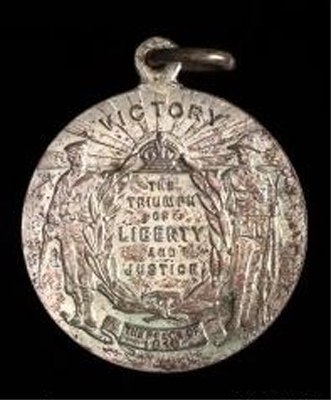 Of the commemorative medals issued to mark the end of the First World War, the most common was the so-called ‘Peace’ or ‘Victory’ medal issued to every child in Australia aged 0-14 years (and aged up to 16 if parents were in the armed forces). The medal was designed by Charles Douglas Richardson, better known for his work as a sculptor. Time constraints as well as pressure from the production of other victory medals meant that no single manufacturer could make the 1,670,000 medals.

Six were therefore selected: Amor, Stokes, Schlank, Parkes, Angus & Coote (who later withdrew) and Platers. The medals were silvered bronze, with silver issues for special presentations. The souvenir is of unique design. On one side is the figure representing Peace, and on either side at her feet are representations of War crushed and Industry awakening. On the back of the souvenir, about the size of a half- penny, are a sailor and a soldier, the latter wearing the characteristic slouch hat. Above their head is a replica of the AIF badge, showing the crown and the rising sun, with the word “Victory.” In the centre are the words “The Triumph of Liberty and Justice. Peace 1919.” The Defence Department supplied a red, white and blue striped ribbon and pin. Distribution began in March 1919.