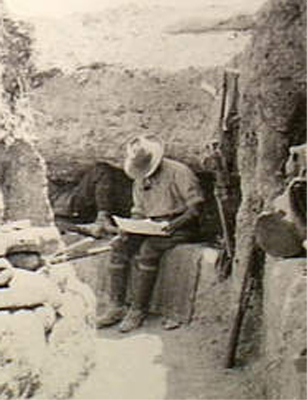 Wounded. Private J. Robinson who was sometime ago reported wounded whilst with the A.I.F in France, has been invalided home and arrived here early this week. He received a cordial welcome from a number of his friends here. He is wounded in the leg and can only get about with the aid of a stick.

Returned Soldiers. On Wednesday Driver F.G Ballinger, a returned Anzac and son of Mr. Ballinger of Eumundi and ?? Robinson were welcomed by a number of Eumundians, Mr.G.H. Cooke on behalf of the residents tendering them a very warm welcome home. Driver Ballinger’s father suitably replied for his son. Private Robinson enlisted at the same time as his friend, and during the 4½ years were always together, being at the landing at Gallipoli with the second Light Horse and with General Allenby in Palestine. They speak in high terms of their treatment since returning.

Mr. and Mrs. J.McIlwraith of Cooran have received word from their son Corporal W.J.McIlwraith that he is now at Metz, after a 100 mile march. He is in good health and tells of many experiences of his march to Germany.

Returning. Word has been received at Kin Kin that Mr. Dixon’s five sons, who

enlisted with the A.I.F and have been on the front, are all returning. Two of them were wounded.

Memorial Meeting. A Public meeting is being held on Saturday to devise a scheme for erecting a permanent memorial to Cooroy district soldiers who took part in the Great War.

Private Alex Crabbe, a well known dairyman here has been returned home after being severely wounded. A warm welcome awaits him when he comes to Cooroy. At present, he is on a visit to his brother, Mr. George Crabbe of Red Hill, Gympie.

New Years Holiday. Mr. A.P Corrie, an original Anzac showed his magic lantern slides and gave his war lecture. Mrs. Donovan placed at his disposal the dining hall which seats 100 and it was full. The audience listened in rapt attention to a graphic account of Anzac, illustrated by lantern slides taken in Gallipoli by the lecturer. The famous evacuation, of which so little is known in detail was explained. Pictures of bivouacs on Sinai’s awful desert and explanations about the food and water problem there showed what the Light Horse endured on the shadeless sands, with

temperatures at 125 in the shade. The Palestine campaign was also set forth.

Returning soldiers. A number of soldiers from Pomona are returning home. On Friday night last Private S.McConnell returned. He was met at the Pomona railway station and given a rousing reception. Private W. M. James returned on Wednesday. Sergeant S. Baker M.M., Corporal C. W. Taylor and Lance Corporal W. Hose are due to return shortly. Arrangements are being made by the returned soldiers’ entertainment committee to give them a fitting reception at a future date.

Soldiers’ Settlement. Mr. J. Rose, the superintendent of the soldiers’ settlement at Beerburrum, visited Pomona on Wednesday and called at the Shire office for the purpose of seeing what land is suitable for soldier settlement fruit growing. He was shown by Mr. Edwards on the maps suitable areas including the tablelands.

Personal. Word has been received by Mrs. Leo Schmidt that her husband who at the outbreak of war proceeded to France with his brother Gustave and joined the French colours will shortly be returning home. His brother was killed in Mesopotamia.