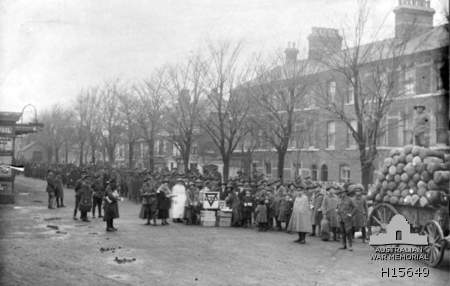 The Australian Y.M.C.A in England controls 26 buildings in England. Each is working at high pressure in serving Australian soldiers during the trying period of demobilisation. The Aldwych Theatre one of the largest of these Australian Red Triangle centres, and the most expensive building controlled by the association, costing £6000 per annum in rent, while the all-round expense of maintenance is £1000 per month, in addition

to the theatre canteen profits, which are also used for this purpose. The Aldwych is the only first class metropolitan theatre in the world which is free to soldiers as a social centre. About 2000 men use it each day, while an average of 600 dinners and 1000 non-ration and other meals are served, while from 1000 to 1500 seats are occupied at each evening performance.

Horseferry road premises, next door to A.I.F. headquarters, are shortly to be used from basement to roof as a second big social centre like Aldwych Theatre. Plans are in operation to make it one of the finest houses of entertainment for soldiers. At present the basement only is used as a restaurant with facilities for reading, writing, &c., and about 600 dinners and 400 other meals are served each day.

Green Hill House, at Sutton Veny, Wiltshire, is a magnificent country mansion, standing in wide acres of park lands adjacent to the principal Australian camps in the area. The building contains over 40 rooms, the best of which have been fitted up for the convenience of the men after parade hours. Sing-Songs and concerts are given daily, and well-cooked meals and teas are served in the big lounge and tea rooms. The grounds include two splendid tennis lawns and a croquet lawn.

“Cacique,” at Weymouth, is very similar to Greenhill House, though on a smaller scale. It is situated midway between the large Australian camps of Westham and Monte Video, and is daily thronged with soldiers.

“The Institute,” overlooking Alexandra Gardens and the beach at Weymouth, is the only building in England which the association manages as a residential hostel for Australian soldiers. About 30 men can be provided with sleeping accommodation, while at least 1000 use the Institute as a social centre each day.

The cinema hall at Westham provides two free cinema shows each week day to Australian soldiers in the Weymouth area, the average attendance at each “house” being from 300 to 400 men.

At the technical training buildings at Westham Camp, Weymouth, classes are daily provided in motor engineering, car running, woodwork and building construction, shorthand, typing, and bookkeeping, land irrigation, and hot-house horticulture. These courses are free to Australian soldiers, and the work is now merged in the A.I.F. education scheme. The plant provided runs into thousands of pounds.

New premises have recently been opened at Brightlingsea for the men of the Australian engineers. Here the Australian sappers congregate to enjoy their leisure.

The hut annexe at Dartford, established by the association for the convenience of patients and convalescents of the Australian Auxiliary Hospital there, is an up-to-date and well-fitted building, and is a social centre for all Australians in that area.

Thirteen large huts, ten in the Australian camps on Salisbury Plain, and three in the Weymouth area, are the most patronised of all the structures in the respective camps. Each of these provides accommodation for the soldiers in the way of letter writing, reading, games, amusement, entertainments, and a canteen for the providing of canteen supplies, hot drinks, and food at reduced prices.

Our hut at the Verne Citadel, Portland, has been established for the convenience of Australian soldiers quartered there, while an open-air stadium at Sutton Veny has a packed audience of Australians at the frequent concerts and boxing tournaments.

This short summary of the work done at the 26 buildings controlled by the Australian Y.M.C.A. in England should give some idea of the extensiveness of the association’s activities, when, it is understood that everything is free to the soldiers except meals and articles purchased at the canteens, all of which are provided at reduced rates – except, lines fixed in price by the military authorities – it will be seen that the Australian Y.M.C.A. is playing no small part in helping the boys keep going.